Something is going to happen in Southern California on Friday that hasn’t happened in at least six years, possibly longer. It’s going to rain a whole, heckuva lot, and that rain is going to be accompanied by a wide range of other hazards.

It’s all part of one of the most intense storms to strike the region since before the state’s epic drought began in 2012, which is likely to bring several inches of rain on average to areas from Santa Barbara southward to San Diego.

Higher rainfall totals, likely into the double digits, will occur in mountainous areas, with heavy snow falling in the higher peaks of Los Angeles and San Diego counties, among others.

This will lead to landslide and mudslide concerns as heavy rain runs off already saturated hillsides, and flash flooding issues even in urban areas. The highest mudslide risks will be across areas that have burn scars from wildfires.

The storm, which combines an unusually intense low pressure area with a firehose of moisture whose hose stretches back for more than 2,000 miles, way out to near Hawaii, will rage throughout the day on Friday and into Saturday in one of the most populated and storm-averse areas of the country.

At its peak, winds are likely to gust greater than 50 miles per hour in the Los Angeles and San Diego metro areas, which will cause extensive air travel delays and down trees and power lines. Some areas could see winds approach or exceed 100 miles per hour, particularly in the higher elevations of San Diego County.

High wind warnings have been issued for higher elevation areas around Los Angeles and all of San Diego County, where officials are bracing for sustained winds of tropical storm force, or 39 miles per hour or greater, along with higher gusts as the storm center nears the coast. 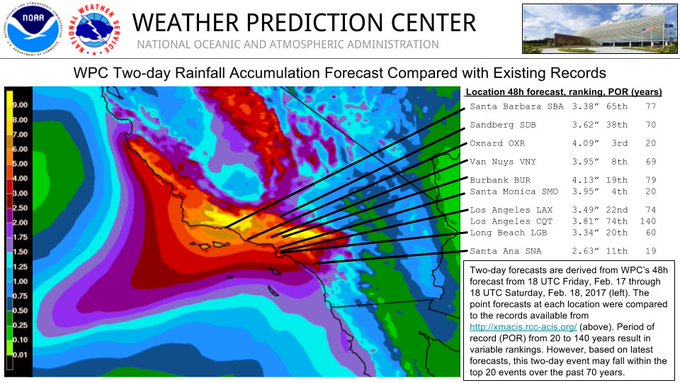 The National Weather Service has issued a dizzying array of watches and warnings to cover all the storm impacts, which can be found on weather.gov.

According to the agency’s predicted rainfall amounts, some spots could see a two-day rainfall total that ranks within the top 10 all-time heaviest two-day rain events, but this is not expected for most spots.

According to the Weather Service’s San Diego forecast office, a storm of this intensity at such a low latitude in the state is extremely rare, or “off the charts when looking at the past 30-year record,” the agency said in a forecast discussion.