The coldest air of the season so far is set to dive into the northeastern United States this weekend.

A cold front will dive southward on Friday, causing temperatures behind it to plummet well below normal for the weekend.

“A brisk northwest wind will bring an early December-like chill to the Northeast this weekend,” AccuWeather Meteorologist Max Vido said. 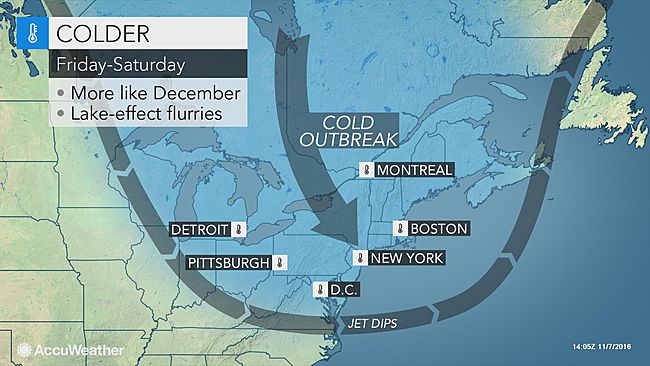 High temperatures from New York City, Philadelphia and Washington, D.C., will be around 10 degrees Fahrenheit below normal for mid-November. The strong northwest winds will make it feel far colder.

Saturday will be the coldest day of the weekend.

Warm clothing will be required for any outdoor activities on Friday night into Saturday as AccuWeather Realfeel® Temperatures will be in the 30s from Washington, D.C., to Philadelphia and in the 20s from New York City to Boston.

There will be a winter chill for Friday and Saturday night sporting events across the region.

In interior portions of the Northeast, Realfeel® Temperatures will fall into the teens during Saturday morning.

The cold air moving over the relatively warm waters of the Great Lakes will produce persistent cloud cover and areas of rain and snow to the southeast.

“This setup will be conducive for lake-effect rain and snow showers,”

During Friday night, light rain will change to all snow, even at lower elevations away from the immediate lakeshore, as temperatures fall below freezing, bringing a coating to areas that have the most persistent snow showers.

While snow showers will initially melt on area roadways during Friday night, slick spots may develop once temperatures fall below freezing.

Snow showers will then mix or change over to rain showers during Saturday afternoon across the lower elevations of Pennsylvania and New York state as temperatures rise above freezing. Little or no accumulation is expected.

“In the higher elevations of Pennsylvania and New York state, precipitation may stay in the form of snow all day Saturday,” Vido said.

Snow showers will also stretch into northern New England. A few flurries may even approach the I-95 corridor. Enough snow may fall to shovel, especially across the Catskills, Adirondacks and White and Green Mountains by Saturday night.

Temperatures will recover a bit on Sunday afternoon as high pressure pushes the brunt of the cold away, along with the clouds and wind. However, highs will still be below average.