El Niño officially came to an end in early June, and experts are calling for a La Niña to develop in its footsteps.

La Niña is the cool counterpart to El Niño, characterized by unusually low ocean temperatures in the central and eastern equatorial Pacific.

The jet stream is a narrow zone of strong winds in the upper levels of the atmosphere, separating warm air to the south and cooler air to the north.

At this point in the season, AccuWeather forecasters are predicting a weak La Niña to develop during late fall and into the winter. An area of warmer-than-normal water off the northwestern U.S. coast, nicknamed the “warm blob,” is inhibiting a strong La Niña from forming.

The pocket of warm water is expected to linger, influencing La Niña and its impacts in the United States.

Here’s what a weak La Niña could mean for the U.S.:

A developing weak La Niña will lead to an uptick in tropical activity in the Atlantic Ocean through the rest of the peak hurricane season, which ends on Nov. 30.

“Historically, some hurricane seasons that have followed a transition from El Niño to La Niña have been very active. It’s possible we could flip from one extreme to the other, from below-normal seasons the past three years to an above-normal year in 2016,” AccuWeather Hurricane Expert Dan Kottlowski said.

La Niña will suppress the westerly winds that typically disrupt tropical development in the Atlantic, giving way for more systems to form.

Transitioning into the fall, warmth could hold on late in the season across the eastern United States. 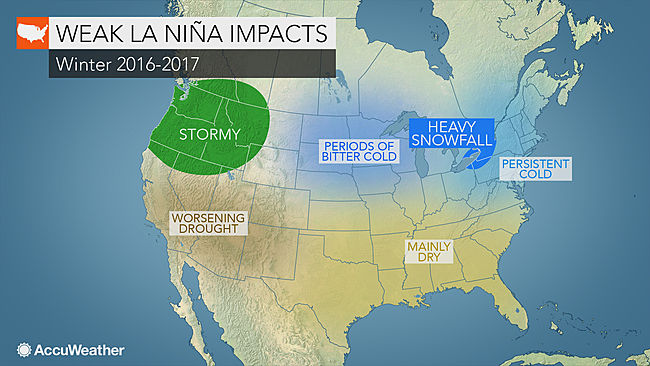 La Niña will bring its full impacts to the U.S. throughout the winter season, Pastelok said.

In the East, snowfall is expected to be around normal. La Niña could lead to some big East Coast systems during the second half of the season.

Colder-than-normal conditions are predicted to grip the northern Rockies and northern Plains over the late fall and into the winter, with some harsh spells at times.

During the coldest periods in the winter, nighttime temperatures could drop into the minus 30 to minus 40-degree Fahrenheit range.

“The wet and stormy weather that will hit the South into the fall will begin to quiet down in the winter as La Niña really kicks in,” Pastelok said.

However, the expected weak strength of La Niña will allow some moisture to sneak into the region at times.

For flood-ravaged areas like Missouri and eastern Texas, the mainly dry weather will prove beneficial.

Dry weather will exacerbate drought conditions across the Southwest. Central and Southern California could face the harshest conditions, including below-normal snowpack in the southern Sierra Nevada.

The northwestern U.S. will experience the brunt of La Niña’s impacts, leading to stormy conditions throughout the winter. However, the warm blob will limit the cold a typical La Niña would bring to the area.

Alaska could face another warmer-than-normal winter on the heels of a record-breaking season last year.